Episode XXV: …And then the Good News?

Later that same day, Tabitha paid a visit to the resort to check on things. Going over the first quarterly report with the manager, she was very surprised and pleased to learn that the resort had earned a $13,000 profit. There was now $67,000 in the household fund.

Tabitha had another pleasant surprise when she learned that Dr. Chad was visiting the resort once again.

Tabitha invited Dr. Chad up to her luxury suite so that they might have a conversation. Tabitha told him that she had something that she wanted to talk to him about other than work. 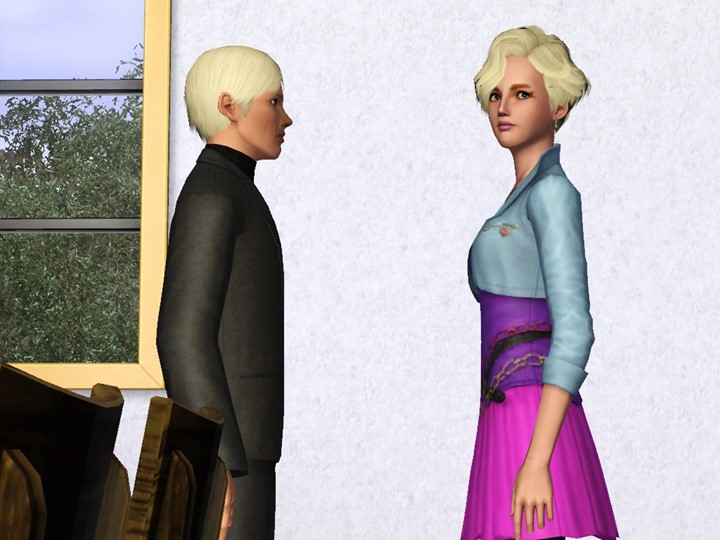 Briefly she stuttered and stammered trying to let out her feelings toward the doctor. Then in a moment of lust she blurted out “Oh, what the hell!” and grabbing the doctor by the wrists, she kissed him passionately on the lips.

The couple spent the rest of the afternoon and evening in Tabitha’s bedroom.

That same evening Ronnie played a gig at the Aztec Theatre downtown.

Around 9:30 PM as Ronnie was leaving for home she happened to look back at the theatre where she saw a strange blonde woman running from the entrance. Despite the color of the woman’s hair, Ronnie was certain that the woman she saw was Tabitha’s long missing sister. In a state of shock she drove home in the pouring rain.

When she arrived home, Mike was there in the foyer to greet her. Ronnie was very upset and she was shaking when she told Mike: “I just now saw Raquel LeFey outside the theatre in town!”