The History of Twin Bayous – The Way We Were

When Mike and Jackie went out camping on Liberty Cay state park in the fall of 1962, Mike asked Jackie Clemens to marry him.

There was however one little problem… Jackie Clemens was not Jackie Clemens. She was actually Jackie Poindexter and she had been so since 1926 when she married Sheena’s grandfather, Ariel Poindexter.

She and Ariel had two children, a daughter named Cortney and a son named Darnell.

Some time back in the 1940’s, Jackie left her husband and children and devoted herself entirely to her work as a doctor at the hospital. The couple never bothered to get a divorce and Ariel went on to have more children by other women.

To complicate things she and Ariel had been married in Champs Les Sims, France and according to the Simoleonic Code they were required to finalize their divorce in the country of origin. Luckily, only one partner was required to be present. Jackie had some regrets about leaving her children, but she was happy now that she had a second chance on life.

So, Mike and Jackie went off to France so that Jackie would get divorced, Jackie and Mike would marry, and then the newlyweds would have their honeymoon at the vineyard that Jackie owned there.

After they married, they took a little rowboat out on the river…

…and spent the entire afternoon catching frogs for their dinner.

Mike did not mind a bit that his wife was much better at fishing than he was.

That night Mike made the dinner and afterwards Jackie read aloud from a book of poetry that she found in the library.

Both Mike and Jackie were the happiest that they had ever been in their lives. 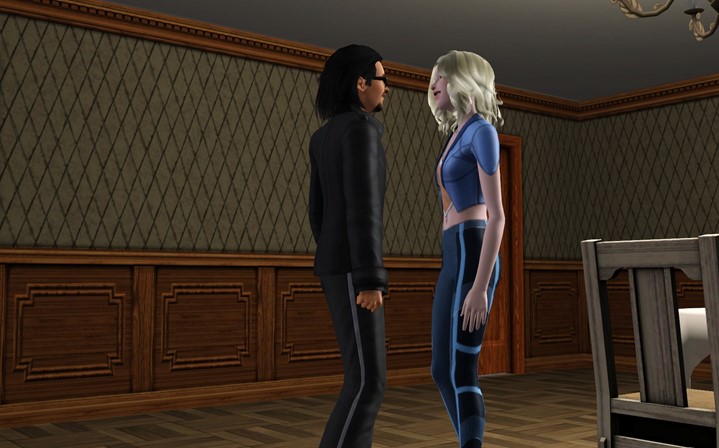 And as for that unmarked potion that Mike had consumed when he first came home from Monte Vista, it was determined to have been Bottle Witches Brew.

For now, Jackie was okay that Mike was a supernatural, but she told him that she was going to keep a close eye on him and hope that things did not get out of hand. Mike had a job lined up when they got home. Tabitha LeFey-Gentille had hired him to work at the old Fortune Telling Wagon.

All in all, they were a very happy couple in the spring of 1963.